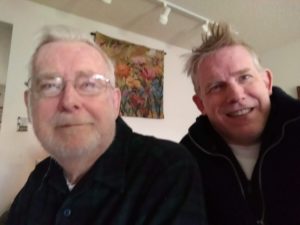 When my sister called to tell me that our 77-year-old father was a sex offender, I immediately rushed to my parents’ house with my usual knee-jerk savior response.  I had only a few minutes to assess the situation before the police came to arrest him, and four years later, I am still assessing things.

It’s now clear that my dad has dementia, probably Alzheimer’s dementia.  It’s amazing to watch him become confused by elevators, screwdrivers, and his bills.  Even more amazing, Dad was caught kissing my 8-year-old niece while in the backyard, in clear view of 3 neighbors’ houses and my mother looking out the kitchen window.  I’m told this was not the first time he kissed her like that, and there is some controversy over how long this has been going on, which is really, really painful.  Happily for everyone, Dad has never lied or asked anyone to lie about this.  By his own words and by the accounts of 3 court-affiliated, expert psychologists, he was confused about the difference between affection and sexual behavior.

With the help of his court-appointed therapist, he now knows that kissing his granddaughter in such a “lustful” way was wrong.  He knows, now, that he is responsible and that an 8-year-old cannot consent to sexual behavior.  And yet, HOW IN THE WORLD did he NOT know that before is a mystery to me.  The psychological word for this is disinhibition, but I find it hard to look at my Dad and use technical terms.  I know I should.  The psychologist spent 60 minutes with me on the phone explaining that this is part of the human condition.  He rationally explained the statistics to me.  But my dad is not a statistic.  He’s my dad.

I wonder:  how do we make sense of something that doesn’t make sense?  Do we tolerate cognitive dissonance?  I know we all do to some degree — we’re not Vulcan characters from a science fiction TV show — but of all the people in the world, your dad should make sense, right?  That’s what dads do: make sense of the world.

My Dad makes light of his illness, and dementia experts say that is normal.  Sometimes he seems just fine, other times, not; and this, I read, is typical of the disease.  The three things that grieve him most are his banishment from church, his loss of voting privileges, and his estrangement from his daughter.  He simply wants to be forgiven for a mistake.  And yet, the church is outraged, the law is outraged, and my sister is outraged.  So am I, if I’m honest.  Television crime dramas would have us monsterize sex offenders and thus, deter others from behaving the same.  But the hard truth is that dementia is not going to adjust to us; we have to adjust to it.  The smart thing to do is save our outrage for the disease, not the disease sufferer, and consider that one day, it could be any of us in trouble with the law.  No one is immune.

I don’t have children of my own, and I will never know what it feels like to be the parent of a child who was abused.  I do, however, know what it feels like to see a parent suffer from dementia:  the so-called “long goodbye.”  Every week, I’m surprised by something my dad does or doesn’t do, and I have to remind myself that nothing I can say will fix him.  A child, you can teach and hope for better; a parent with dementia, you just love and accept.

I’m proud to be a caregiver; it’s an awesome responsibility, and the closest job to being a parent I will ever have.  How I came to this position was horrible, but here I am, doing what needs to be done.  I just wish it felt more normal, because despite the lack of reporting by the news media, this is a normal part of the human experience.

I have been on the registry since 1996. My lawyer recommended a plea at that time, even though my wife and three daughters testified to my claim that my offense never happened. I am a […]

In 2008 I was charged with abusing my two adopted sons. For which I was guilty. At the time I wanted to kill myself and/or spend the rest of my life in prison. Both of the […]

Today I’m a pastor running a community safe residential re-entry program for sex offenders. We have grown from a fledgling pioneer in sex offender re-entry to a well-respected organization recognized as experts in sex offender […]